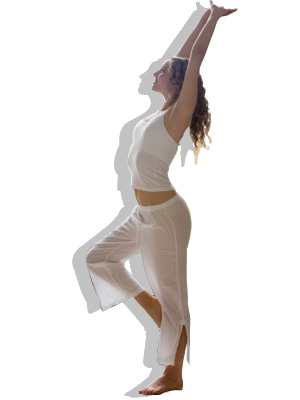 Focus of Ashtanga yoga is on strength as against other yoga forms where the emphasis in on breathing, relaxation and flexibility.

The term 'Ashtanga' means 'eight limbs' thereby referring to the eight limbs of the Ashtanga Yoga. Ashtanga yoga is done as part of a series quickly moving from one posture to another. Ashtanga Yoga postures are more difficult that those in other styles. Focus of Ashtanga yoga is on strength as against other yoga forms where the emphasis in on breathing, relaxation and flexibility.

Ashtanga in general is a fast moving form of yoga. The performer is expected to quickly progress from one yoga pose to another in a packed sequence. The focus on Ashtanga Yoga is on 'Vinyasa' and 'Tristhana'. The practitioner of Ashtanga yoga has to take synchronized breaths; inhaling and exhaling as the asanas are performed. The practice of Ashtanga is with a predefined set of postures always in the same order combined with specific breathing exercises. This is beneficial in channelizing a restless mind and a body with boundless energy. Tristhana refers to the three subjects of focus during the practice of yoga:

These are essentials for cleansing the body and clearing the mind. While asanas improve one's posture, a well balanced inhale and exhale routine contributes to an efficient breathing system. Ashtanga yoga also comprises other popular components which include the internal locks 'bandhas', gaze 'drishti' and all forms of Hatha yoga asana.

Bandhas: There are three internal body locks prescribed in different postures. Banda assists its performer in retaining, maintaining and managing a yogic pose. In simple terms, it is a contraction of a bundle of muscles.

Mula bandha or the root lock is used to tighten the muscles around the pelvic and perineum areas.

Udiyana bandha is the contraction of muscles in the lower abdominal area. The navel is brought to the base of the spine during this yogic posture.

Throat lock or 'jalandhara bandha' whereby the gaze is brought to the tip of the nose is achieved by lowering the chin slightly and raising the sternum.

Drishti: These refer to the nine places that the yogi looks at while doing the yoga postures. These dristhis are the nose, between the eyebrows, navel, thumb, hands, feet, upright side and left side. Gazing at these will help refine the mind of the yogi.

Ashtanga yoga literally aims to cleanse the practitioner's mind through a series of eight steps. Each and every step has to be mastered before proceeding to the next, or even attempting it.

While the first four steps are for physical cleansing the last four are for mental and spiritual cleansing. It should take at least seventy five to ninety minutes to complete a series of Ashtanga yoga. The opening sequence of the Ashtanga poses begins with the Salutations to the Sun God (Surya Namaskar).

Ashtanga yoga is for those who desire to build up strength, stamina and some body flexibility. This yoga is popular with the athletics. Since Ashtanga comprises a sequence of yoga postures, the performer is likely to experience very demanding routine after a body warming routine that is designed to activate one's muscles.