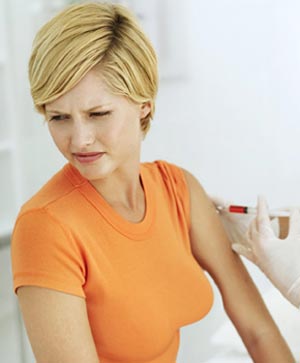 This page provides an insight into anemia, its causes and its different manifestations. Find out how iron deficiency anemia is detected and treated.

Types of Anemia and their Causes
Anemia is defined as "a pathologic deficiency in the amount of oxygen-carrying hemoglobin in the red blood cells." Anemia occurs as a result of vitamin or iron deficiencies, increased destruction of red blood cells, blood loss or through genetic or acquired defects or disease. There are different types of anemia and each has its own causes and treatments.

Iron deficiency Anemia
This type of anemia is caused due to the deficiency of iron which is essential for the production of hemoglobin in red blood cells. The main causes of iron deficiency anemia are poor absorption of iron by the body, inadequate intake of iron, pregnancy, growth spurts or blood loss due to heavy menstrual period or internal bleeding. Anemia occurs when the iron supply in the body and bone marrow is depleted. In general, women have smaller stores of iron than men. Iron deficiency anemia leads to inadequate iron in the red blood cells to meet body demands.

It is noticed that nearly 20% women and 50% of pregnant women suffer iron deficiency anemia. Women suffering from iron deficiency anemia tend to feel cold since iron plays a key role in body temperature regulation. They may also experience tiredness since their bodies do not get adequate oxygen. Persons suffering from iron deficiency anemia have pale skin color and experience shortness of breath, dizziness and frontal headache. Blood tests can measure the hemoglobin levels, serum iron levels and the iron binding capacity in the blood. Those on a predominantly vegetarian diet are at risk of developing iron if they do not supplement their meals with sufficient quantities of broccoli, spinach and other substances that are high in iron.

Anemia and Pregnancy
Iron deficiency results in anemia especially if you are pregnant. It is important to check for anemia at your first prenatal test. Intake of adequate iron is very important during pregnancy. You may well run short of iron as your baby starts growing. The baby will draw your iron reserves around week 20. Deficiency in iron will affect the growing fetus and expectant mother.

Anemia caused by Destruction of Red Blood Cells
This kind of anemia is caused by the destruction of red blood cells in our body. It includes hemolytic Anemia, Autoimmune hemolytic anemia, sickle cell anemia and thalassemia.

Sickle Cell Anemia
Sickle cell anemia is again caused by the destruction of red blood cells in our body. The red blood cells are generally soft and round in shape. These cells flow easily through our blood vessels to deliver oxygen to all parts of the body. Sickle cells are different from normal red blood cells in that they are much stiffer with a curved shape. Their shape stops them from flowing easily and they get clogged up inside smaller blood vessels. This stops the blood from flowing properly. Important organs like the brain, heart, or kidneys need constant blood flow to stay healthy.

Although our body attacks and destroys these sickle cells, it can't make new blood cells fast enough to replace the older ones. This results in the decrease in number of red blood cells leading to anemia. Sickle cell anemia is generally caused by genetic defects or disease. A child with sickle cell anemia has inherited a defective hemoglobin gene. Symptoms of sickle cell anemia include fatigue, breathlessness, rapid heart rate, delayed growth and puberty, susceptibility to infections, excessive penis pain, chest pain and decreased fertility.

Thalassemia
Thalassemia is a severe form of anemia in which red blood cells are rapidly destroyed and iron is deposited in the skin and vital organs. This kind of anemia involves decreased and defective production of hemoglobin. Hemoglobin is a molecule found in our red blood cells and it has two different kinds of protein chains named alpha and beta chains. Any deficiency in these chains causes abnormalities in the formation, size and shape of red blood cells.

Anemia caused by Blood Loss
Anemia occurs due to extensive blood loss. The red blood cells in our body can be lost through bleeding which goes undetected over a period of time. This kind of bleeding may often results from gastrointestinal conditions such as ulcers, hemorrhoids, gastritis (inflammation of the stomach) and cancer. Chronic bleeding can also occur with use of non steroidal anti-inflammatory drugs (NSAIDS) such as aspirin or Motrin. Menstruation and childbirth often cause significant blood loss in women, especially if menstrual bleeding is excessive.

Aplastic Anemia
Aplastic anemia occurs as a result of the body's inefficiency to make enough red blood cells. More often, aplastic anemia is caused by a viral infection or exposure to certain toxic chemicals, radiation or medications such as antibiotics, anti seizure medications or cancer medications. Fanconi Anemia results from an unexplained failure of the bone marrow to produce red blood cells. Aplastic anemia may occur suddenly or may take some time to develop. The common symptoms of this type of anemia include fatigue, shortness of breath with exertion, rapid heart rate, pale skin, skin rash and prolonged bleeding from cuts. Aplastic anemia has been linked to radiation, insecticides and environmental toxins.


This is another type of inherited anemia that passes onto children if parents had been affected by Fanconi anemia. If both the parents carry a defective (Fanconi anemia) gene, then there is a possibility for their children to get affected by the same. Aplastic anemia is diagnosed by blood and bone marrow tests. It is a medical emergency and is treated with antibiotics, bone marrow transplant and blood transfusion. The person is placed in isolation to prevent any transfer of infection and so that reduced activity will reduce the symptoms of anemia. Patients are prone to severe bleeding due to insufficient clotting. It can occur equally in males and females and occurs across all ethnic groups.

Anemia Treatment
The good thing about anemia is that it can be treated. Treatment for anemia depends on the cause of the condition. Be sure to have checked by a doctor, for the treatment required to treat your anemic condition. If you have iron deficiency anemia then the physician may prescribe iron pills in addition to iron rich foods. Similarly if you have B12 deficiency, doctor may prescribe you to take folic acid and other vitamin B12 supplements. Some cases of sickle cell anemia, thalassemia and aplastic anemia may require bone marrow transplantation.