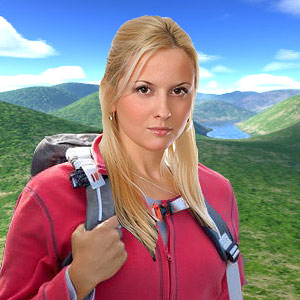 Altitude sickness or acute mountain sickness occurs in certain people when they are at great heights, usually at altitudes above 8000 feet. They tend to feel sick, nauseous and uncomfortable.

Altitude sickness or acute mountain sickness occurs in certain people when they are at great heights, usually at altitudes above 8000 feet. They tend to feel sick, nauseous and uncomfortable. Although it might be suggested that lower levels of oxygen cause symptoms of altitude sickness, the percentage of oxygen remains the same at a level of 21% even up to 70,000 feet. However, air pressure changes with altitude, altering the number of oxygen and nitrogen molecules therefore providing the body less oxygen than it requires to keep the body and mind performing optimally at heights above 10,000 feet.

Usually rest will help the symptoms recede. Medication must be used only if descent and rest do not help. Seek professional help if symptoms worsen or do not improve.

Acute mountain sickness may lead to high-altitude pulmonary edema (HAPE) or high-altitude cerebral edema (HACE) which is a dangerous illness. HAPE occurs during exertion and young and otherwise healthy mountain climbers are prone to it. Fast or shallow breathing, cough along with sputum, blue fingernails or lips, severe fatigue and tightness in the chest are some of the symptoms.

In the case of HACE, the brain stops functioning properly due to swelling and this condition tends to be life threatening within a few hours or days. Some of the symptoms of HACE include staggering, confusion, difficulties with thinking and lethargy. Altitude sickness has many flu-like symptoms such as headache which may also result from dehydration. Weakness, disturbed sleep and an upset stomach are other symptoms that appear at the onset of this illness. Fatigue, coughing, confusion and breathlessness while at rest are signs of a more serious state. Nausea, giddiness, tiredness and a rapid heartbeat are other symptoms.

People who are not used to living at high altitudes may find it more difficult to cope with lesser amounts of oxygen available at these heights. The first thing they must do is avoid climbing to heights above 8000 feet to stay safe. If one suspects altitude sickness, the or she must promptly seek treatment. It is better to walk up to high altitudes rather than fly or drive to them.

Many individuals experience symptoms of altitude sickness on flights although the altitude is kept below 8,000 feet. They may also experience it during trekking, mountain climbing and other activities which imply ascending over 8000 feet. Symptoms of altitude sickness appear due to strenuous activity. Therefore such activities must be avoided during the first 24 hours of climbing.

Climbers must sleep at lower levels than those at which they ascend during the day. After a day's ascent, it is recommended that the person spend a day or two at the same height for the body to get acclimatized before resuming the journey.

Dehydration of water vapor from the lungs may also lead to symptoms of altitude sickness. Alcohol tends to dehydrate the body. Drinking an adequate amount of water is essential and also reduces the possibility of headaches.

Avoid tobacco and depressant drugs such as barbiturates, tranquilizers, and sleeping pills. Ensure a diet high in carbohydrate, with about 70% of your calories being from carbohydrates.

People suffering from heart conditions, high blood pressure, sickle cell anemia or chronic lung diseases must be careful as they are at higher risk. At the initial stage of altitude sickness, the person can gain relief by descending to a lower height. When the symptoms worsen, the person must additionally seek the assistance of a physician.

Drugs such as Acetazolamide are effective if taken at the early stages of altitude sickness to increase the oxygen intake by aiding faster breathing. Nifedipine and Sildenafil are also helpful. Antioxidant treatments have not been found effective in treating this illness. Acetaminophen can relieve headaches. However, aspirin tends to worsen headaches and ought to be avoided.

Oxygen containers can be used to maintain the pressure level at a constant, and reduce the number of days spent climbing up a mountain. Oxygen is helpful for mild to moderate AMS to reduce its symptoms effectively within a day or two.

Steroids may be used to reduce symptoms of pulmonary edema. However it does not treat the illness itself. Dexamethasone helps decrease swelling and helps prevent and reverse the symptoms of altitude sickness.

A Gamow bag, which is a portable hyperbaric chamber, may be used in severe cases where a quick and immediate descent is not possible. Hyperventilation or taking in large amounts of air has not been proved to be effective. A tea made from the coca plant is used in Latin America to treat altitude sickness. The effectiveness of Gingko Biloba is also being tested.