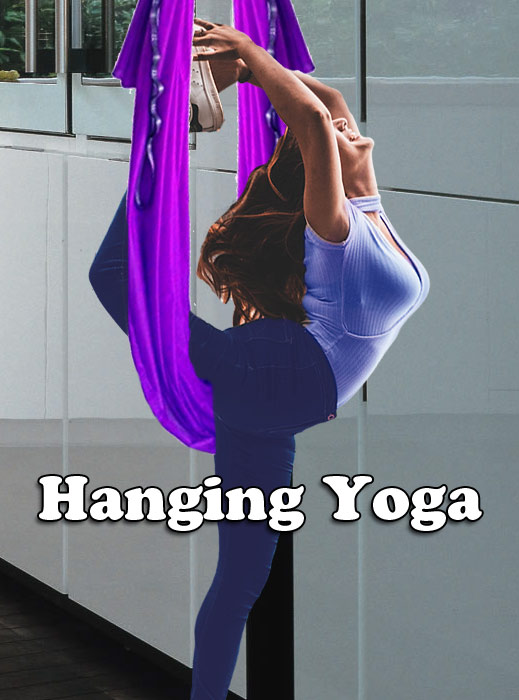 Working on the concept of counter-gravity, aerial yoga poses are very beneficial in releasing muscle tension, decompressing the spine and enhancing blood circulation. You can strengthen core muscles and increase shoulder flexibility.

Also sometimes referred to as Aerial Yoga, Suspension Yoga or Anti Gravity Yoga, Hanging Yoga is more a kind of suspended yoga practice that also assimilates Pilates into the workout. Working on the concept of counter-gravity, aerial yoga poses are very beneficial in releasing muscle tension, decompressing the spine and enhancing blood circulation. Christopher Harrison, a Broadway choreographer is credited with creating aerial yoga – a blend of yogic poses, Pilates, Calisthenics and acrobatics.

It can't be called yoga practice in the strictest sense; more a yoga-inspired exercise. Many a yoga pose can be done easily sans strain with the support of the hanging yoga hammock. It aids body stretching and strengthening especially for those who need support mid-air. Most poses are performed in a weightless aerial environment. The hammock serves as an anti-gravity support while performing inversions or stretches.

Typically the hanging yoga hammock is hung close to the ground. It serves to support the hips in forward and back bends. When doing the inversions sans this support, it might lay too much pressure on the neck. With aerial yoga, the silk hammock ensures that there is no pressure on the spine or neck. A strong but soft textured silk hammock supports the body which makes even complicated yoga postures relatively easy to achieve. Besides it allows you to linger in such poses longer than possible without such support. You will realize this as soon as you move past the initial stages when compared with old school Yoga Asanas.

The silk hammock designed for Antigravity yoga should be capable of supporting up to nearly 1000 lb or 400 kg of weight. So unless you weigh close to this limit, you shouldn't be worried about a break. Again the hammock silk has smooth soft texture so that it doesn't hurt your skin. It would be worth your while to check that the silk yoke is fastened properly before you launch into aerial yoga. Most practitioners hang the hammocks closer to the ground for a reason - that the person doing the yoga can launch from a standing pose and not have to resort to undue aerial acrobatics. Essentially the traditional Yoga - specially the Hatha Yoga insists that one is comfortable doing the asanas (physical postures) as the process of doing yoga tries to arrest catabolism.

Aerial yoga is best not practiced by those who suffer vertigo and pregnant women. Those prone to motion sickness might feel uncomfortable. Since there is no impact on the spine, the stretches and inversions can help those suffering back pain. Those who have never exercised must start slow so as to avoid injury. Wear comfortable clothes. Ensure that the hammock is safely installed. Initially it might appear scary but once you let go of your fear, you will learn to trust the support of the hammock.

Regular practice of aerial yoga can aid in improving balance as well as healing digestion-related issues. Aerial yoga allows for free movement with lesser effort. The counter-gravity inversions are supported by the silk hammock, increasing flexibility and deepening the practice. You can strengthen core muscles and increase shoulder flexibility. The psychological benefits of this form of yoga practice include stress relief by putting you into a meditative state – must like a deep-tissue massage. Your ‘happy hormones' are boosted and thereby you end up feeling better!