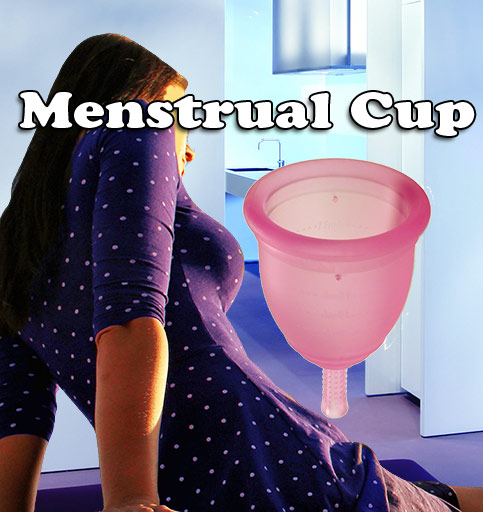 Menstrual cups pose fewer health risks than standard disposable product and are generally highly sanitary and eco-friendly means of dealing with your period. True, some practice is needed to become comfortable with a menstrual cup.

The first menstrual cup was manufactured in the US in 1987 and since then, there have been several variations in the manufacture of menstrual cups - ranging from rubber to silicone.

What is menstrual cup ?

This is a feminine hygiene product made of flexible medical grade silicon. It can be worn inside the vagina during menstruation to catch menstrual fluid. Quite unlike tampons and pads, menstrual cup collects menstrual fluid rather than absorbing it. The menstrual cup can be cleaned and reused, allowing one cup to last as long as ten years. A simple calculation tells you that the women of the world at the current scenario use nearly 430,000 tons of sanitary pads every year. If some of them switch to more reusable products, it could save substantial resources.

Anatomy of a menstrual cup

A menstrual cup consists of the following main parts including air holes, the body of the cup, the stem and inner support rings.

The rim is the top edge of the cup and in some menstrual cups a thick rim feature helps the cup to be held once it has been inserted. Some brands feature a slim, comfortable rim and inner support rings which serve the same purpose.

The air holes allow releasing the suction when the body of the cup is pinched to remove it. Even a gentle wash with warm soapy water will clear the air holes and make it easy to release maximum capacity.

The body of the cup holds the menstrual flow and capacity refers to how much the cup can hold. The average menstrual cycle produces only about 30 to 60 ml over three to five days and the cup in most cases, the cup designed to hold about 38 ml.

The stem of the cup helps to remove the cup, by yanking on the stem which aids to move the body of the cup close enough to the vaginal opening so that you can pinch the base of it. While stems are left untrimmed, you can choose to trim the stem. The stem can be trimmed after trying the cup for a couple of days.

How does the menstrual cup work ?

The cup is small, flexible and is made of silicone or latex rubber. Before your periods begin, the menstrual cup has to be tightly folded and inserted like a tampon without an applicator. It is similar to putting a diaphragm or a birth control ring in place.

The cup may need to be rotated first and then it will spring open and rest against the walls of the vagina. It forms a seal to prevent leaks. The blood simply drips into the cup.

While some cups are reusable, some are disposable. To remove it, the stem sticking out at the bottom has to be pinched at the base so that the seal is released.

After the cup is emptied, wash with soap and water and replace. At the end of the cycle, the cup can be sterilized with boiling water. The menstrual cup, like any other product can be bought online or over the counter at grocery or drug stores.

Just like the first time you use the tampon, using a menstrual cup might not go 100% smoothly the first time. Although many are tempted to do a dry run when not on your period, this is not recommended as it is generally more lubricated and your cervix could be at a different position while menstruating.

The C fold shown on the instruction manual is not the best technique for many women. When using the C fold, ensure that the widest part of the cup is just at the beginning. Another fold is the punch-down fold. To make this fold, place the finger on the rim of the cup and push it down into the cup.

Wash hands with soap and rinse the cup with water to remove any dust and dirt from hands and the cup. The first time it is used, it should be boiled as well. Soap should never be used on a menstrual cup. It can cause yeast infections amongst other problems.

It is important to stay relaxed and not tense the pelvic muscles. It may be difficult and painful to insert the cup first. Therefore, it is necessary to practice loosening and tightening these muscles so that you will be able to relax them during insertion.

It is again essential to get into a comfortable position while inserting the cup over the toilet. You can try squatting down in the tub or shower, or stand and put one leg on the edge of the toilet or tub, put your back against a wall and get into a squat position or lay down on the floor with your knees up and legs apart.

You have to aim placing the cup at the direction of the cervix and be careful not to accidentally poke the cervix which can cause problems. The other option would be to aim the cup towards the small of your back.

You can insert the cup by folding the cup and holding it with one hand, spread apart the labia and find the opening of the vagina with your other hand. The cup should be pushed in about a 45 degree angle towards the public bone, not straight up. The cup should pop open and be pushed until it is comfortable. Make sure that the cup is fully open.

The usual waiting time for emptying the menstrual cup is twelve hours. In case of heavy flow, you will have to empty the cup more often. For the first cycle with a cup, you may have to do some experimenting to find out how long you can leave the cup without leaking. It is wise to wear a back-up panty liner, cloth panty liners are a good reusable option.

To remove the cup, bear down your muscles so that the cup will travel down farther. Continue doing this until you can reach the stem. Wiggle the cup back and forth and down. Get a better grip on the actual base, not just the stem of the cup and continue to pull it out. Pinching the base helps to break the vacuum and makes it easier to remove the cup. Ensure that the cup is taken out in an upright position to reduce spillage. If the rim of the cup is too wide to remove comfortably, use a finger to fold the cup into a C fold and punch-down fold before it is taken out of the vagina.

The contents of the cup can be dumped into the toilet or sink; the cup can be rinsed with water and cleaned, and kept clear. Dry the cup if it is too slippery and reinsert.

It is imperative to learn to clean the cup – it can be boiled, sterilized with tablets, swabbed down with rubbing alcohol or by other methods.

It is eco-friendly and wallet-friendly at once. A reusable cup that can cost $ 30 to 40 can last up to ten years. This also means fewer landfills and less money over time. You can leave it in for twelve hours whereas tampons need to be changed every four to eight hours depending on the flow. So it is good for overnight protection. A menstrual cup can hold more, that is 1 ounce of liquid which is roughly twice the amount of a super absorbent tampon or pad. This difference can be a huge comfort during heavy flow days.

While most silicone and rubber menstrual cups must be removed before sex, the soft disposable ones are designed with sex in mind. As they look like a diaphragm and shaped like a dome, that partner cannot feel them and there is no blood to worry about.

Menstrual blood can start to smell when exposed to air, whereas the cup forms an airtight seal. It is so safe that it can even be perfectly worn in the swimming pool.

This is safer than a tampon and has a lower risk of toxic shock syndrome. And compared to a pad, it has no chance of chafing or rash.

It is important for you to wash hands before inserting the cup, to clean it well between uses, and to empty it two or three times a day.

It can be tough to find the right fit as cups come in different sizes depending on age and flow and if you have had a child. It can take some trial and error and it could leak till it is set.

Removal of the cup can get messy and sometimes embarrassing as it can get tricky. You need to sit or squat and use the pelvic floor muscles to push the cup down and then reach up and grab the stem. There is also the danger of spilling if the cup is kept slightly at an angle.

Some manufacturers do not recommend using a menstrual cup if you have an intrauterine device inserted as chances are the cup could pull on the string and dislodge it. Although there is no evidence on this, it is better to consult the doctor before combining the two.

Storing menstrual cup when not in use

A breathable pouch comes along with the cup for storing purposes. If you have lost it, then it can be stored in a cotton pouch. Do not store it in an airtight container or re-salable bag, as the cup needs to breathe.

There are some who do not feel the cup at all and rave about how comfortable it is. In some others, the stem is a bother or they are aware of it. It is common sense to try using the cup for a few cycles and then decide whether it is comfortable or not.

Menstrual cups pose fewer health risks than standard disposable product and are generally highly sanitary and eco-friendly means of dealing with your period. True, some practice is needed to become comfortable with a menstrual cup. But, after a few trial and errors, it could still work comfortably for you.