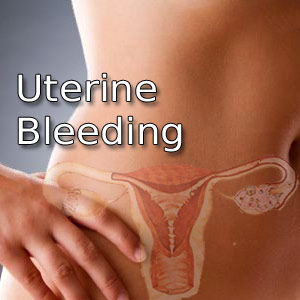 Most women go through some sort of dysfunctional uterine bleeding at some stage, from menarche to perimenopause. Read more about DUB and ways to manage it.

Nearly 14 percent of women experience irregular or excessively heavy menstrual bleeding or dysfunctional Uterine Bleeding (DUB) which is defined as 'abnormal bleeding of the genital tract and it is based in the uterus in the absence of organic diseases. It is found in the absence of any demonstrable structural or organic pathology.' In some instances, the term is used to refer to hormonal mechanism. Hormonal disturbances are usually the cause of DUB. In diagnosis, organic pathology must first be ruled out. DUB is classified as Ovulatory and Anovulatory, depending upon ovulation occurring or not.

Ovulatory DUB: About 10% women suffer from this. Here the progesterone secretion is prolonged as the estrogen levels are low. This causes irregular shedding of the uterine lining and breakthrough bleeding. Some associate ovulatory DUB with fragile blood vessels in the uterus.

Anovulatory DUB: Anovulatory menstrual cycles are common at the extremes of reproductive age such as puberty and perimenopause. This is a stage when women do not develop and release properly mature eggs. As a result, the corpus luteum, producer of progesterone, does not form. Consequently, estrogen is continuously produced and periods can be delayed or very heavy and prolonged when it occurs.

Symptoms of DUB might include mood swings, vaginal tenderness and hirsutism.

The cause of DUB could be a pathological disorder such as that of the endocrine or structural lesions or it could be induced by infections or medications.

Infections such as Chlamydia, gonorrhea, and PID can cause DUB. Medications including hormonal agents, low dose oral contraceptive pills, nonprogestin containing IUDs and non-steroidal anti-inflammatory drugs and Norplant systems, tamoxifen and warfarin can cause DUB.

Treatment and management of DUB

The primary goal of treating dysfunctional uterine bleeding is to arrest bleeding. Replacement of iron loss, avoidance of anemia and prevention of future bleeding are other goals.

Also, hormonal therapy which is nonspecific is used; such as combined with high dose estrogen and high dose progestin. Ormeloxifene is another non-hormonal medication that treats DUB but all these drugs can be taken only under prescription by an authorized medical attendant only. Such hormonal therapy either stops or regulates menstrual periods.

In some cases hysterectomy is performed. Surgical treatment is reserved for bleeding that cannot be controlled with medicine or hormone therapy. In case of acute, severe uterine bleeding a short course of high dose estrogen therapy is done. If this is not effective, especially in rare cases, a dilation and curettage is done to clear the uterus of tissue. If necessary, blood transfusion is carried out to quickly restore needed blood volume.

For ongoing treatment of uterine bleeding, certain factors such as age, cause of the condition, future plans of the patient such as pregnancy must be considered. If you are in your teens, wait till the periods get more regular. A doctor may prescribe progestin or birth control pills to regulate the cycle.

If you are not ovulating regularly, and it is difficult to predict how long the irregular bleeding will last, you may be given hormone therapy. In case, you have no future childbearing plans, and suffer severe symptoms, you can opt for surgical treatment to remove uterus or to destroy the uterine lining.

If you are ovulating regularly, and suffer irregular vaginal bleeding and plan to become pregnant in the future, talk to your doctor about various treatment options. Oral progestin or birth control pills may be suggested until the bleeding become more regular. If you have no future pregnancy plans, consider endometrial ablation or hysterectomy.

Gonodotropin releasing hormone analogues (GnRH-As) are rarely used these days. These drugs reduce the production of estrogen and make your body think that it is menopause but the moment you discontinue medicines, the symptoms will recur, along with side effects of this treatment.

In all, it is estimated that 5% of women between the age groups of 30 to 49 seek treatment each year for DUB. 30% of women experience DUB at some time or the other. Although DUB is a common health issue among women, diagnosing DUB can be very frustrating for doctors, as this is a diagnosis of exclusion.