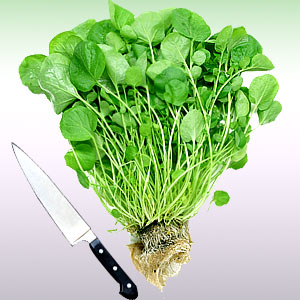 A prominent member of the cabbage family, watercress is one of the oldest leaf vegetables. Try out simple and nutritious watercress soups and watercress salads.

Reports published in American Journal of Clinical Nutrition by the University of Ulster Scientists reveal that 'eating watercress daily can significantly reduce DNA damage to blood cells which is considered an important trigger in the development of cancer'. A prominent member of the cabbage family, watercress is one of the oldest leaf vegetables consumed by human beings. Watercress is botanically related to garden cress and mustard, all of them known for their natural peppery tangy flavor.

Watercress is a perennial herb native of Europe and naturalized in all continents, popular for its biting taste that adds zest to fresh salads. It is one of the main ingredients in a vegetable juice. It is a favorite for tea sandwiches and soups. Watercress is for those who want to detoxify and energize their bodies. Delicious watercress soup can be great for breakfast and also a part of office lunch.

Watercress is fast growing, can be harvested year around whenever needed, it is easy to grow from the seeds and is readily available in most produce seasons. Interestingly, Huntsville, Alabama is called 'Watercress Capital of the World'.

Watercress contains fifteen essential vitamins and minerals. Watercress contains significant amounts of iron, calcium, folic acid and vitamins A, B1, B2, B3, B5, B6, B17, C, D, E and K. Watercress can act as a mild stimulant and promotes appetite. It is a source of phytochemicals and antioxidants. Watercress is a diuretic, an expectorant and digestive aid. Other therapeutic uses of watercress include relief from coughs, head colds, bronchial ailments, asthma, stress, pain, arthritis, stiff back and joints, diabetes, anemia, constipation and emphysema.

Watercress is one of the best sources of element iodine which is important for the function of the thyroid gland. The leaves of watercress is used as a poultice and applied for relief from enlarged prostrate gland. Sulfur contained in watercress plays an important part in protein absorption, blood purifying, cell building and in healthy hair and skin.

Watercress is known for its antiscorbutic qualities. The leaves bruised or the juice from watercress can free the face of blotches, spots and blemishes when applied as a lotion. A daily portion of watercress in cancer patients has the ability to reduce DNA to a significant level and to increase those cells to resist further DNA damage caused by free radicals. Watercress also has the ability to reduce in blood triglyceride levels by an average of 10%.

Significant increase in blood levels of lutein and beta carotene which have antioxidant activity by 100% and 33% respectively can be seen by regular intake of watercress. These are associated with a lower incidence of eye diseases such as cataract and age related macular degeneration.

Most Westerners consume watercress raw. In East, it is blanched, the moisture removed and then chopped and tossed with a light edible oil dressing. Chinese often stir watercress with a little salt, sugar and wine or use it in soups. Watercress can be best stored in the refrigerator with its stems in water and the leaves loosely covered with a plastic bag.

Salt and pepper to taste

Melt the butter gently and fry the vegetables for about five minutes. Add the chicken stock and bring to boil. Simmer for about twenty minutes till the potatoes are soft. Cool a little and add cream and watercress. Liquidize until smooth. Heat through for a hot soup or chill for three to four hours to serve cold.

Salt and pepper to taste

Cook onion in butter in a large pan until soft. Add stock and potatoes and cook till potatoes are soft. Add watercress and diced pear for the last five minutes of cooking time. Liquidize and add cream. Add a little milk if the soup becomes too thick. Season and cool. Chill in the refrigerator for at least eight hours before serving.

Add onions and potatoes to heated oil in a large pan. Cook for about ten minutes until softened. Add the stock to bring up to a boil. Turn down the heat and allow simmering for twenty minutes. Stir in the watercress and cook for five more minutes. Cool the soup before liquidizing. Pour the soup to the pan and stir in the cream and season with salt and black pepper. Before serving, heat the soup on slow simmer after adding the salmon cubes.

Add watercress, basil and artichoke hearts in a large bowl. Whisk olive oil, lemon juice, sea salt and black pepper until blended in a small bowl. Pour the dressing over the salad and gently toss.

In a small bowl combine all the dressing ingredients and allow to chill till ready to use. Blanch asparagus in boiling water for five minutes until tender but crisp. Drain and rinse in cold water. In a large bowl mix the watercress, strawberries and asparagus and toss with the dressing.

Clean and refresh watercress in chilled water for about ten minutes. Mix and crush the other ingredients together using pestle and mortar. Drain and shake dry the watercress. Add the dressing, toss and serve.