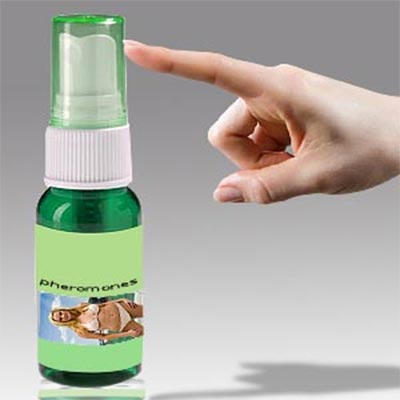 When pheromones are unknowingly inhaled by a male, they send out a natural chemical signal which will compel him to be drawn toward a woman and make her irresistible to him. It rejuvenates a sagging relationship, increases intimate moments, sexual desire and passionate moments.

The term 'pheromone' is a chemical signal that triggers a natural response from members of the same species. Female pheromones can be said to be an evolutionary remnant from the time when human males relied on scent to locate female mates. Pheromone is often defined as a 'hormonal secretion which stimulates a physiological or behavioral response from individuals of the same species.'

Female pheromones are naturally found in the perspiration of women and in vaginal secretions called 'copulins'. These copulins are strongest at the fertile stage of the female reproductive cycle. This level is drastically reduced by hormonal imbalance which is caused by contraceptive preparations and menopause. These influence the male perception to the extent of inducing hormonal changes in males.

Female pheromones are invisible and undetectable. When they are unknowingly inhaled by a male, they send out a natural chemical signal which will compel him to be drawn toward a woman and make her irresistible to him.


There are pheromones exclusively designed for women who wish to attract the opposite sex. Simply applying these euphoria perfumes and sprays makes her more confident and perks up her sex life too. The pheromones elicit sexual behaviors from the opposite sex and increase natural desire and attraction.

Research has thrown open several synthetic pheromones for women which has the innate ability to raise the testosterone levels of men who inhale them by about 150% almost instantaneously. Usually a couple of dabs are put on with cologne or perfume and the wonder formula works miraculously!

Why do female pheromones attract men?


The pheromones stimulate the hypothalamus in the center of the brain which is the seat of emotions through the VomeroNasal Organ (VNO) in his nose. The pheromone sends a signal to the hypothalamus of sexual desire, lust and attraction without him having any idea why. Female pheromones trigger powerful romantic responses from men.


Some well-controlled scientific studies establish 'unconscious odor cues by synchronization of menstrual cycles' in women. When a group of women were exposed to a whiff of perspiration from other women it caused their menstrual cycles to either speed up or slow down depending on the time of the month the sweat was collected. So much so, there are two types of female pheromone established with one produced prior to ovulation that shortens the ovarian cycle and the other produced just at ovulation which lengthens the cycle.

There are laboratories that have recreated a woman's oil using human pheromones. These are scientifically designed, tested and proven to regulate menstrual cycles, increase fertility and ignite sex drive.


Probably the best thing about female pheromones is that they are completely odorless and can be blended easily with a favorite perfume or spray for convenience. Pheromone formula is easy to use as it can be worn just like any other perfume or spray. A few drops can be applied to the neck, forearms or any other part of her body.

It is imperative to understand that not all copulins are created equal and for maximum pheromone effect, a precise ratio of aromatic compounds has to be maintained. Pheromones are for external use only and they should not be ingested.

Benefits of pheromones for women


Pheromones in a way do what perfumes, make-up, hair styles, clothing and posture do for you. Pheromones facilitate conversations, positive feelings and increase a sense of interest in him for you! Pheromone aids her to naturally attract the male gender with more sex appeal. It rejuvenates a sagging relationship, increases intimate moments, sexual desire and passionate moments.

Top of the Page: Pheromones for Women
Popularity Index: 100,543