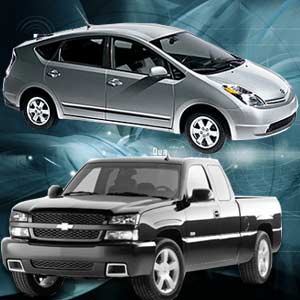 There is a moderate yet noticeable transformation that is happening in the automobile industry. Hybrid cars, hybrid trucks or other hybrid vehicles are gaining popularity amongst automobile buyers. Choosing a hybrid vehicle isn't merely a matter of choice. 'Green image' and 'New technology' are the two proven mantras that are driving hybrid vehicles into the mainstream automobile market. In an era of spiraling gas costs, the fuel efficiency factor is vital to woo prospective buyers.

Going by the existing upward trend, automobile industry analysts have predicted that more than one million hybrid gas-electric vehicles will be on the move in America by late 2007. Find out what a hybrid vehicle is and how it works. This can definitely you're your selection process as you become familiar with popular brands reigning the automobile market and the futuristic hybrid vehicles that are on the anvil for 2007.

Hybrid vehicles aren't an invention of the current decade. In the year 1997, the first generation Toyota Prius and Honda Insight were introduced into the Japanese market. However, three decades earlier to this, Victor Wouk had built a hybrid gas-electric vehicle and is often referred to by his admirers as 'Father of the Modern Hybrid Automobile'.

Marked by introduction of different technology, today over 300,000 hybrid vehicles ply on American roads. This decade is marked by the introduction of Renault Kangoo, which is a plug-in hybrid electric vehicle. It requires no conventional fuel especially for short trips and can be recharged from the electrical power grid.

As against the conventional gasoline powered vehicles that run solely on fossil fuels or the electric powered vehicles, hybrid vehicles take a deviation. Simply put, any vehicle is termed hybrid provided it combines two or more sources of power in different ways. The power provides propulsion to the vehicle either directly or indirectly.

It could either be a parallel hybrid or a series hybrid. Gasoline (petrol or diesel)-electric versions (gas electric hybrid) are the common power sources used in hybrid vehicles. Batteries power the electric motor in hybrid vehicles. These batteries are designed in such a way that the recharge automatically while you drive.

Hybrid vehicles also have regenerative breaking, a special unique system to capture braking energy that is stored in an onboard battery. For example, when the vehicle is decelerating, the electric motor's performance is reversed and power is sent back to the battery for future use. This results in optimization of energy usage. The same is applicable even when the driver lifts his foot off the accelerator pedal. Hybrid vehicles are considered intelligent vehicles

Take a look at the statistics that prove the upswing in consumer's demand for hybrid vehicles, particularly hybrid cars.

Opting for a hybrid vehicle means using less gasoline and affecting the environment to a minimum level (closer to zero emission) through reduced emission. Lesser emissions result in increased mileage. Even in large vehicles such as SUVs, pick-up trucks and buses, vehicle owners are satisfied with the increased gas mileage.

Toyota enjoys market leadership in the hybrid car industry. Honda and Ford are other two major players dominating the hybrid vehicle industry. The growing demand however, has encouraged different automobile makers to work on hybrid model. Prius of Toyota enjoys the top spot. Prius entered the U.S market in 2000 and has emerged as the best-selling hybrid vehicle. Next comes, Honda's Civic hybrid followed by Toyota Highlander hybrid. The most interesting common feature shared by these hybrid vehicles is that the petrol and battery source is computer integrated.