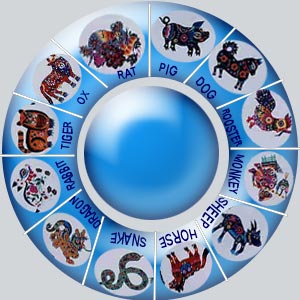 The Chinese zodiac calendar follows the lunar calendar and assigns an animal to each Chinese zodiac sign. Find out more about this ancient system of grouping persons born in a certain year during a certain time period.

The Chinese have adopted the Western calendar since 1911, and the ancient lunar calendar is popular only during festive times, like the Chinese New Year. Find out how the Chinese Zodiac Calendar is different from the western zodiac. We list out the characteristics of each Chinese zodiac sign. Find out what animal sign you come under!

The Chinese Lunar calendar is basically different from the Western concept of time which is linear. For the westerner, time proceeds in a straight line: past, present and future: before and after the birth of Christ. The Chinese Zodiac is based on the Lunar Calendar: based on the cycles of the Moon whereas the westerner follows the Solar Calendar: based on the movements of the Sun. Chinese see Moon as the closest to the Earth and believe in its tremendous effects on us. While the solar calendar begins on January 1, the Chinese lunar calendar begins sometime between late January and early February.

Each year of the Chinese Lunar Calendar is assigned a particular animal sign. The animals in the particular order of appearance are rat, ox, tiger, rabbit, dragon, snake, horse, sheep, monkey, rooster, dog and boar (pig). This is akin to the different moon signs in the western zodiac. After every twelve years, the same animal sign reappears.

As ancient folklore goes, Lord Buddha summoned all the animals at the time of departing from the Earth. Only twelve animals came to bid him farewell. As a reward he named a year after each one in the order that it arrived, with rat being the first and the pig the last.

According to another Chinese legend, the twelve animals quarreled one day as to who was to head the cycle of years. The gods were asked to decide and they held a contest; whoever was to reach the opposite bank of the river would be first and the rest of the animals would receive their years according to their finish. All the twelve animals gathered at the river bank and jumped in.

Unknown to the ox, the rat had jumped upon his back. Just when the ox was about to jump ashore, the rat jumped off the ox's back and won the race. The pig, which was very lazy, ended up last. That is why the rat is the first year of the animal cycle, the ox second and the pig last.

According to the Chinese Zodiac, the animal sign predicts the person's inborn characteristics. Yet it would be a misconception to say that there is only one single animal associated with a particular person. The Chinese zodiac assigns the animal signs not just to the year but also to particular months of the calendar year as well as the local time of the day. Each animal sign corresponds to a 'large hour' consisting of a two hour period for each animal (12 animal signs x 2 = 24 hours of a day).

The yearly cycle represents what we perceive as the 'external personality' of the person. The 'inner animal' is assigned by the month and the 'secret animal' by the exact time of birth. For example, a person may appear as a 'Dragon' externally, but internally he may be a 'snake' or an 'ox'.

Each of the twelve animal signs interacts with each other in a 'special' way. This is explained by a 'compatibility chart' in the Chinese zodiac. Numbers 1 to 10 are ranked on a scale with 1as least compatible and 10 most compatible.

In addition to the animal signs, the Chinese zodiac believes that the entire universe is controlled by the five elements: metal, water, wood, fire and earth which act on the basic animal sign in every individual. These five elements are associated with the five major planets: Venus (Metal), Jupiter (Wood), Mercury (Water), Mars (Fire) and Saturn (Earth). The Chinese Zodiac does not classify the elements as weakest or strongest. They are equal and work on and with each other. They are linked by the chain of life.

The Chinese Zodiac works on a binary 'Yin-Yang' cycle, with each of the above five elements enlarged to a cycle of ten. Even years are 'Yang' and odd years are 'Yin'. The zodiac animal cycle of twelve is divisible by two and each zodiac occurs either in a Yin or a Yang. The Dragon for instance, is a Yang. The Snake is a Yin. This combination creates a sixty year cycle beginning with the rat and ending with the Pig. It is astounding to note that there are 8640 combinations in the Chinese Zodiac: a combination of 5 elements, 12 animals, 12 months and 12 times a year.